Less than a year after releasing their first brew, the Door County Brewing Co. is entrenching itself as a must-have taste of Door County. 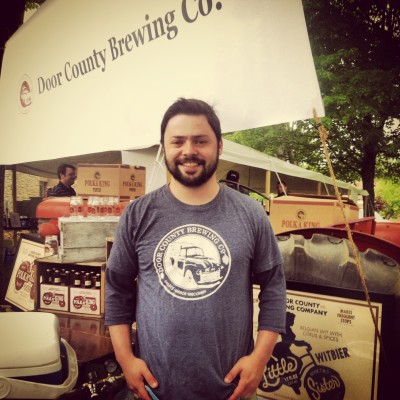 With releases like the Polka King Porter (its most popular) and Goat Parade, the brewery is following the footsteps of craft breweries using quirky names to pique the curiosity of drinkers. Its flavor, however, that’s earning them the respect of aficionados.

You can now find the Polka King Porter (named for the late, legendary Freddie Kodanko, Door County’s Polka King and a man known to enjoy the “occasional” alcoholic beverage) on shelves in Milwaukee, Madison, and throughout northeast Wisconsin.

I caught up with head brewer Danny McMahon to talk about the brewery’s growth, flavor profile, and what’s ahead.

Myles Dannhausen (MD):  Is the Polka King Porter is your best seller by a longshot?

Danny McMahon (DM):  It’s the one we sell the most of, but surprisingly, it’s just a little more than Little Sister. The Goat Parade, our fall seasonal, is doing well too. We’ve been thrilled with the response so far.

MD:  With that, your distribution continues to grow every week it seems.

DM:  Things are going pretty good. We’re in Milwaukee and Madison. Some of the Liquor Stores are carrying us. Trixie’s rated us 11 out of 12 on their podcast for the Polka King and that gave us a great boost.

We’re also in most of the Woodman’s in Wisconsin now. We’re popping up in a lot of places now. It’s pretty cool.

MD:  Part of that popularity is your labeling too, which is done by another Door County native now living in Chicago.

DM:  Yeah, Alicia Daubner handles all the labels and designs. Everything she’s done has been really great so far. She does amazing work.

MD: You create the recipes in Door County, but aren’t actually brewing on the peninsula yet. Explain how production works for you guys.

DM:  Right, we actually brew out at Sand Creek Brewery’s facility in Black River Falls. We don’t have the ability to produce enough here yet. We get six week’s notice when the distributors think they’ll need more product, then we go out to Black River Falls for a couple days to brew. Sand Creek does something like 10 different beers, but they’re also big into contract brewing. Right now we’re one of their biggest accounts.

MD:  Yeah, you guys are taking another track with your flavors. There are a lot of IPAs out there, and they’re selling well, but you’re going a different direction, especially with sour beers.

Is that a decision you made by looking at the market and competition, or just a personal taste preference?

DM:  Right now New Glarus is the only brewery consistently doing sour beers, so we do a bunch of beer that isn’t that common in Wisconsin. But it’s not so much about a market opportunity, it’s more that it’s just what we’re interested in.

I like a good IPA, don’t get me wrong, and I could make a pretty decent IPA, but I don’t want to compete with a million other IPAs. I’d rather compete with a few hundred sours or other kinds of beers for shelf space.

It allows for room to do something different. There’s so much competition to get hops contracts because they’re already spoken for. There’s a two or three-year wait list to get citra hops right now. Those are used mostly for IPAs and pale ales. They have a big fruity profile that’s just fantastic and now everyone wants to get on that citrus train. I don’t want to wait or compete for those hops.

MD: You guys have a location in Baileys Harbor. What are the plans for that spot and what’s the plan for the year ahead?

DM:  We’ve got a really cool little thing going on right now. We’d love to renovate the Baileys Harbor building by next Memorial day and turn it into a tap room. In the basement we’d like to put a 7-barrel system. Then we’d use it just for the fun stuff, a lot of really cool experimental stuff. Those Baileys Harbor beers are going to take a few months and maybe a year or two. Want to be an actual Door County Brewery, not just a Door County name.

MD:  Do you plan to release anything new this winter?

DM:  Right now focusing on the flagships – Polka King, Little Sister. Just want to push those core brands. We’re not makinganything new in a large quantity that will be bottled until the springtime. Then we’ve got two new beers for American Craft Beer Week in late April or early May.

Then we’ll have at least one new beer to unveil at the Door County Beer Festival in June. We’re working with a wild yeast strain, Brettanomyces, that has a funky, fruity flavor. It’s more approachable than a straight-up, in-your-face sour.